The time has finally come for people who have been taken advantage of to receive the voice and attention that is appropriate, rather than to be lost in the sea of powerless people who have no chance of receiving justice.

Ed Magedson (pronounced Maj-ed-sen) is the founder and “ED”itor-in-Chief of the Ripoff Report web site located at http://www.ripoffreport.com/ which he began in 1997.  Over the past decade, Ed has been called everything from “consumer hero” to “internet terrorist”.  However, Ed’s story began long before there was such a thing as the Internet.

A native New Yorker, Ed was born in Brooklyn and raised in Long Island, New York.  His family lived across the street from a carnation farm and when he was 10 years old, Ed occasionally worked around the farm.  This prepared him for his first business venture, a nationwide flower business called The Flower Children.

When ED was 14, he wanted to be a veterinarian.  He bought several horses over time and competed in many horse shows with many trophies.  He worked nights in a Long Island bakery and spent his days helping a veterinarian at the Roosevelt Raceway.  He was fired after turning in trainers for pumping injured horses with drugs so they could race.

ED also had a natural ear for music.  He taught piano and, at the age of 15, he became the organ player in several popular rock bands.  The other band members were in their 20’s and 30’s, and although Ed himself wasn’t old enough to drink, they often played in bars and nightclubs around Long Island and the New York City area.

Ed’s first step in the direction of being an entrepreneur came when he had the idea of selling flowers on street corners.  Ed eventually developed that idea into a business at the age of 18.  By the mid-1970s, he was founder and president of his first business.  Eventually, that business grew into a nationwide firm called The Flower Children.  The business hired young hippies and senior citizens to sell small bunches of fresh-cut carnations, daises, roses and pom-poms on street corners across America under red and yellow umbrellas.  At its peak, the business operated in 25 different states and at the age of 21 Ed (known as “Eddie” back then) was called “The Flower Child Entrepreneur” by the local media in Florida. 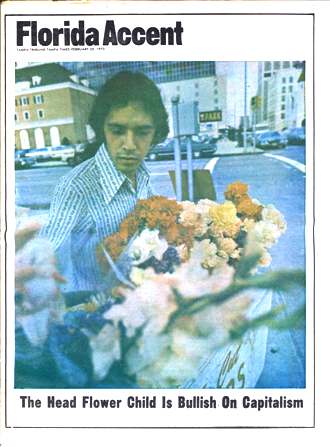 From the very beginning, the flower business flourished. But the business also met with serious adversity, which started Ed in the direction of his current passion for consumer advocacy.  In many cities, the local floral shops instigated authorities to harass Ed’s flower vendors. The big flower companies were using their power and connection to put the little guy out of business.

Click here to read about Ed’s battle with zoning inspectors 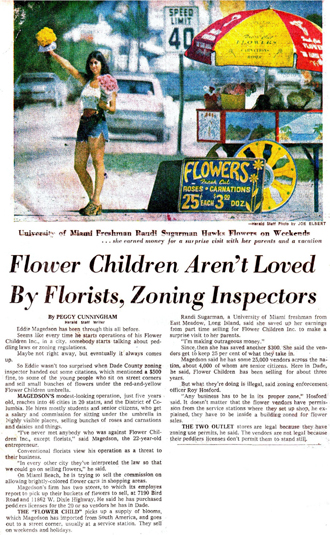 Ed always fought the cities and never lost.  This planted the fateful seed that led Ed in the direction of exposing corruption and bad business practices. Ed later convinced several grocery store chains to let him put his flowers into their stores. These grocery store chains said, “Flowers will never sell in grocery stores”.

Ed’s next business venture also helped to prepare him for the launch of Ripoff Report.  In the 90’s Ed was working on developing housing in upstate New York, Tupper Lake and Saranac Lake.  He purchased real estate and apartment complexes.  Ed was contacted by government agencies in Albany, New York and asked if he would create additional housing for the underprivileged, disabled and other victims of housing discrimation.  Ed immediately agreed, but he was considered by some to be an outsider in the small rural town.  Eventually, Ed became the target of discrimination, anti-Semitism and harassment from the same people he thought could be trusted – local agencies and law enforcement.  Once again, this experience drew Ed further down the path of a life spent fighting and exposing corruption.

The final chapter in the story leading to the creation of Ripoff Report was a run-in Ed had with city officials in Arizona. In 1990, Ed moved to Arizona to take care of his parents so they would never have to experience assisted living facilities.   At that time, there were many large vacant buildings in Arizona and many small businesses trying to make ends meet.  Seeing this as an opportunity, Ed came up with a new way to put them back in business — operating indoor swap meets.  The business venture was a big success, but once again, Ed encountered bad business practices and political corruption.  Frustrated with the lack of an effective way to fight back, he created his first website where he described his experience in Mesa.

At the same time he was experiencing political corruption in Mesa, Arizona, Ed was also outraged at the treatment of the hard workers from Mexico and South America that came to the US in desperation to help their families.  Ed has always been a firm believer in securing the border while allowing people to come here legally for work.  At the same time, he also feels those who are here working to support their families are vulnerable to exploitation and abuse.  He was shocked to learn that many immigrant workers are never paid for their labor.  Even worse, some have been treated as modern-day slaves, even being threatened with deportation if they complain about not being paid.  Ed began raising awarenesss and calling for a stop to these practices back in 1997.  You can read more about Ed’s efforts to stop the abuse of immigrant workers here and you can click here to see the educational flyer that Ed has distributed to immigrants for more than ten years.

Ed’s numerous business ventures and his fights with City Hall eventually led him to create the Ripoff Report.  As Ed Magedson explained in his book, Rip-off Revenge, he wants to give others the power to fight back by giving them the tools needed to do battle with business bullies.  For more information about Ed’s book, visit: http://www.ripoffrevenge.com/

One little-known fact about Ripoff Report is that it was started as a mission, not a business.  Ed never expected to earn a living from the Ripoff Report.  Instead, he put his own hard-earned money and time into the website with the sole intention of giving a voice to consumers who had previously been powerless.  He had no revenue plan or any idea how or whether the site would ever generate any money.  The website was set up as a free service and it was created long before Ed had any understanding of how to monetize a website.  In the early days, it was funded entirely by Ed’s personal savings.  It was not until several years later when the lawsuits started that Ed needed to create programs to earn revenue or face losing the Ripoff Report website.  Now, 13 years later, the Ripoff Report has grown into one of the most popular consumer complaint resources on the Internet.

Today, Ed Magedson is living and working somewhere in Arizona.  (If you received constant harassment and death threats, you’d be quiet about where you lived, too.)  In addition to constantly fighting to protect free speech and the First Amendment, Ed devotes his life to his beloved pets and to raising money for no-kill animal shelters.

Over the past 30 years, Ed has traded his music, his freedom and his privacy for a computer.  He is well aware of the many lessons he’s learned in his life so far-lessons that are relevant every single day; lessons that led him to commit his life to changing the way that businesses deal with their customers.

At Ripoff Report.com, hundreds of consumer complaints are reported every day. Consumers come to Ripoff Report to warn other people about deceptive business practices.  Ed and Ripoff Report are true pioneers who have literally changed the way that business is done and created an entire new industry.  Thanks to Ed Magedson’s tireless work, day in and day out, consumers today have a new and powerful voice and have saved millions of dollars.  Ed also assists every government agency to help prosecute those ripping off consumers.  No matter what his critics say or do in their efforts to silence him, Ed will never stop fighting to protect the rights of little guy.

March 17, 2015
RipoffReport.com is going MOBILE! The new mobile site will be available April 2015 so look out!

January 10, 2015
“We cannot have a society in which some dictator someplace can start imposing censorship here in the United States,”

January 9, 2015
“People don’t just buy products anymore, they buy the companies that make products, the values they represent and what they stand for,"

January 1, 2015
Check out Ripoff Report behind the scenes!

November 10, 2014
Forbes: What entrepreneurs need to know about the newest policy changes to ROR...